Overview - Assault in King County and Washington State
Washington state assault law provides a simple assault (aka Assault in the Fourth Degree), the lowest serious level criminal assault, by striking or hitting, touching, attempting to harm or injure another person. It also is committed if you place another person in reasonable fear for their own safety by a physical action. Of all the assaults I handle, about 85% – 90% are 4th Degree assaults, which are misdemeanors, and of those approximately 95% are also accompanied by the dreaded “DV tag,” meaning they are DV – Domestic Violence Assaults. Both DV and non-DV 4th degree Assaults are gross misdemeanors, but obviously the DV ones are more serious and have worse impact upon the client’s reputation, criminal background checks whether for job application or retention, school, immigration purposes, travel to Canada and other countries, housing and student loan applications, etc.

If the assault results in serious (“grievous”) bodily harm to the victim, is committed against court staff, attorneys practicing law, prosecutors, judges, law enforcement officers or certain statutorily specified other government employees, etc. who have special enhanced statutory protection under the RCW’s, or if the assault is committed on a child victim under 13 years of age, such assaults, whether DV or non-DV, are FELONIES. Felony assault in Washington State is the worst, most serious type – assault in the First degree, or Assault in the Second Degree or Third Degree. Assault 2 or 1 if they are DV are so-called “strikes” – get three and you receive life without parole – the defendant will live their remaining natural life in, and die in, jail – no way out.

In Washington, a person commits the crime of simple assault (4th Degree assault) by intentionally touching or striking another person, in a harmful or offensive way; attempting to inflict injury on another, when the defendant has the apparent ability to do so; or by committing any act that intentionally places another person in reasonable apprehension of imminent harm. RCW 9A.36.041.

Washington assaults become DV (Domestic Violence) assaults if the alleged victim is a family member or household member, which includes spouses, former spouses, people who have children together, people related by blood or marriage, adults who live together or have lived together, and people who are or have been in a dating relationship. RCW 10.99.020.

Assault in the 4th Degree carries a maximum punishment of 364 days in jail and a $5,000 fine. There are many defense approaches to these complicated scenarios and severely sanctioned crimes of assault; especially those that are also DV assaults.

I have gotten many of these cases dismissed or reduced. Call me to go over your unique case. I will do all I can do to help and will formulate a viable, effective defense strategy and set of options for your consideration. My job is to advise and protect you.

The term “assault” can be used to describe a wide range of situations. The most common involve intentional or attempted harm to another person with or without a weapon.

There are four degrees of assault and the penalties range from gross misdemeanor up to three classes of felony. Consequences for first-, second-, third- and fourth-degree assault vary and are dependent on several factors including the use of a weapon, severity of the injury (if one occurred) and criminal history of the accused (if applicable). 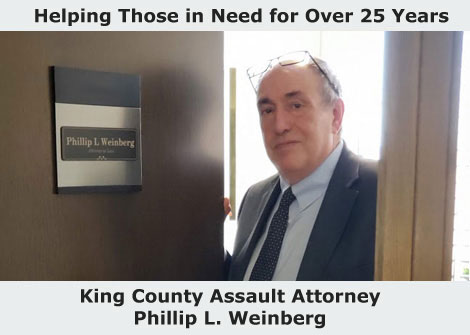